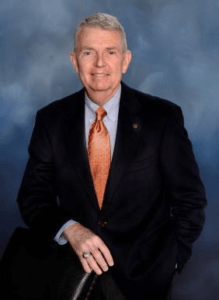 Before joining Auburn University, Fillmer held numerous senior executive positions throughout his 18-
year career with Amdahl and Fujitsu Corporations. He was responsible for the transformation of Amdahl
from a fully integrated provider of mainframe computers and services to the establishment of Fujitsu
Technology Solutions, Inc., an open systems technology company offering Fujitsu UNIX Servers,
Managed Services and Project Services.

Fillmer joined Amdahl Corporation in September 1985 as Director of Business and Strategic Planning for
the Communications Systems Division. He held various executive management and marketing positions
across the company’s divisions, including Senior Vice President and later President and CEO of the
Antares Alliance Group, a software joint venture between Amdahl and EDS. In May 2000, he assumed
additional duties as Amdahl’s Vice President for Services Operations, responsible for customer support
and multi-vendor managed services, worldwide. He was named President and CEO of Amdahl IT
Services and Fujitsu Technology Solutions in November 2001 and completed his career in January 2004.

During the early years of his career, Fillmer worked for AT&T and South Central Bell, managing the
development and implementation of operational support systems during the divestiture of the Regional
Bell Operating Companies from AT&T. He also served seven years in the USAF, receiving a Regular
Commission and attaining the rank of Captain.

Fillmer graduated with High Honors from Auburn University, where he was named the 1969 Outstanding
Graduate of the School of Business. In September 2008, he was selected as a “40 of 40” graduate
recognized by the College of Business as one of 40 graduates over the past 40 years who exemplify the
Auburn spirit and who reflect extraordinary credit upon their alma mater. He also holds a Master’s
Degree in Industrial Management from the University of Alabama.

Fillmer currently serves on the Board of Directors of the East Alabama Medical Center, the
Administrative Board of the Auburn United Methodist Church (AUMC) and chairs the AUMC Finance
Committee.

Fillmer and his wife, Dale, live in Lee County, Alabama